The other year while we were in Shetland we talked to a RSPB helper down at Sumburgh about the plight of our Seabirds and he pointed out a chart showing that a tagged Razorbill had traveled all the way down to Aberdeen to catch some food, showing just how scarce sand-eels are locally. 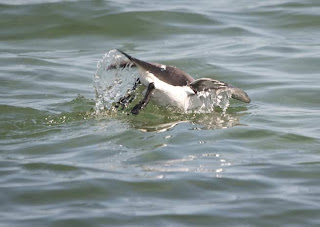 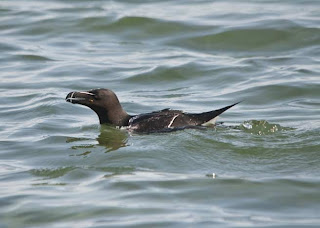 Razorbills nest, in most instances lower down the cliff than Puffins, they often go unseen by most non birders. By those in the know they can be found in pairs usually outside crevices and can be noisy. The have a stout beak with a white band across so easily identified from the similar coloured Guillemot. Only one egg is laid and birds partner for life. 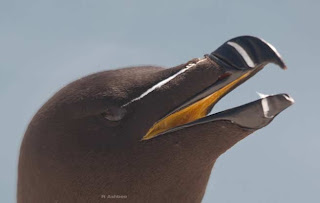 Birds are normally long lived, which helps sustain the population, especially if few young survive. On ringed bird apparently reached the age of 41 but most live until they are around 13 years old. 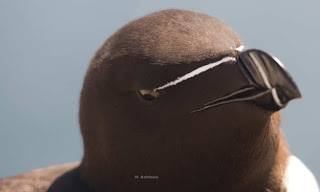 Razorbills, like other auks have short wings ideal for swimming underwater. They normally spread out from other birds when feeding. Adults bring only one fish at a time to their young and at this time much of the foraging is done close to the breeding site.

Razorbills can be easily seen at Sumburgh, Noss, Foula and Hermaness but numbers like all seabirds are in decline and are currently being monitored by the Shetland Bird Club.  A few birds ringed at Hermaness and in Fair Isle had  been found dead around Cornwall but others may be found around the coast of Norway 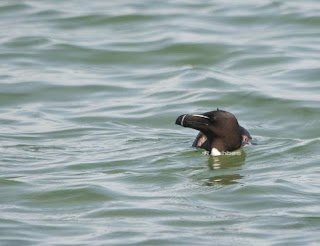 The UK population is thought to be around 187,000 pairs (Seabird 2000 census)
Posted by Shetland Storm Force photography at 05:16