With Britain's second ever Chestnut- eared bunting recently identified at Virkie we can expect to see another rush of twitchers reach the isles, which is great for Shetland's economy. Many other interesting birds are also around, but based on previous experience most will only have eyes for the bunting.

This bird is a mega, as it is  a National rarity , other birds just depends on whether its rare to you and this is governed by your experiences in general and your location in the UK.

Being 70 or so miles from the coast its always a pleasure to encounter seabirds, not that they are rare to us, but sometimes you do see special birds such as the Storm Petrels on Mousa and the long gone Black Browed Albatross which could be found at Saito on Hermaness between 1972 - 1995, although missing for a couple of years towards the end. It was on our third visit that we finally saw Albert as Shetlander's named it, sitting on a ledge half way down a cliff. It was a very windy day and not the best for photography. 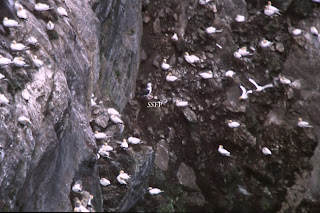 Common Cranes seem a regular spring visitor to Shetland, sometimes in flocks of 4-5 birds, others singles. We have come across a couple over the years, the most memorable on Yell. We had just left our B&B in mid Yell and started to drive down the track when a crane took off from a ditch , it was gigantic. We watch it fly in front of the car before coming down about 300 yards further on where we got excellent views. 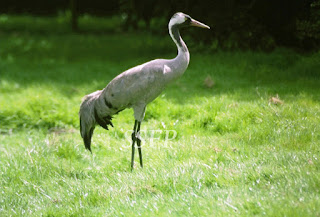 Any raptor usually sends the pulse racing, especially an Eagle on Shetland. We came across this Sea Eagle a few years ago while driving south near to Spiggie. This wing tagged individual originated form the Scottish population and made its way up to Shetland via Orkney , to the displeasure of the local birds. 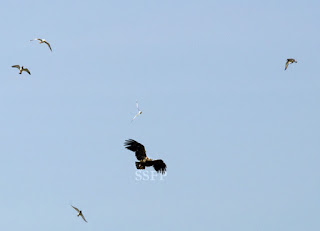 More to come next time
Posted by Shetland Storm Force photography at 06:20 No comments:

October is the silly season.

At one time October used to be the month when twitchers descended on the Sicily Isles but in recent years many have decided that Shetland has become the premier bird spot for autumn bird migration. But it doesn't take long to give all  `birders' a bad name when a minority cause problems.

Already this year people have disregarded warnings by the Shetland Bird club to avoid going into peoples gardens , or on land which is sensitive, leaving gates open, parking problems, being rude the list goes on.

Some Shetland birders have had enough, with one already closing his blog. Others in the long term may be reluctant to share information if the problems get worse. Have some respect for the local people, property and the birds 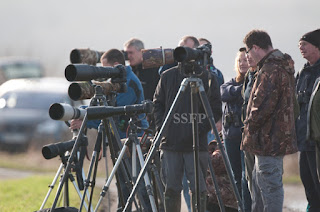 Large gatherings put me off !!

Birding is exciting and very rewarding but I tend to avoid big crowds, I am just as happy to look at the more common birds, something that doesn't seem to appeal to a large number of twitchers. To venture a long way from home just to see one or two birds and disregard the rest seems mad to me. With many dipping out on the rare bird of their dreams it becomes a costly experience.

Others get caught up in mass twitchers, some people viewing a bird have just relied on others to identify it while others can identify a rare bird but struggle with common birds. I know I am showing my age but in my early birding days we took time out to develop our identification skills, undertook surveys and made a contribution to the birding world by submitting bird records. I have heard a number of times that the Shetland bird club doesn't receive enough records of the common birds , but that's a problem with other bird groups as well.

Some people get hooked on adding a new bird to their list, last year in Shetland I was on a boat trip to Mousa I got talking to a father and son, the lad had already amassed 365 birds and he was only 14 years old. On the way back he talked about the lack of good birds !!!!, on the other hand I was excited with the views I had just had of Artic tern, Artic skua, Black Guillemot, Red Throated Diver, various waders, close ups of Skylark, Wheater and Eider duck, while I would have consider a rarer bird a bonus. Look at the bigger picture and you will never be disappointed. 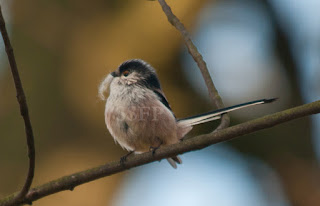 A Long tailed tit, a common bird in England, but when one appeared this month on Unst it was only the 5th record for Shetland, and the first one on the island for 151 years

Shetland reveals its secrets slowly, over the years we have seen rare birds, but as it has been in spring when few twitchers can react quick enough, birds pass through the islands quicker, on their way to the breeding grounds, than in autumn.

On the next blog I will share some of the rarer bird sightings.
Posted by Shetland Storm Force photography at 05:42 No comments:

The familiar sound of the Kittiwakes is less evident now that it was when we first visited the seabird colonies at Hermaness, Noss and Sumburgh back in 1987.

Kittiwakes have been studied for some while in Shetland and it has been found that 58 colonies exist. Back in 1969-70 Operation Seafarer Census discovered over 47,000 nests and in the early 1980's numbers increased to over 54,500 (1981). Since then numbers have been dramatically reduced due to food shortages, especially Sandeels which then normally collect near the surface of the sea. In the 1992-02 survey numbers dropped to 25,800. 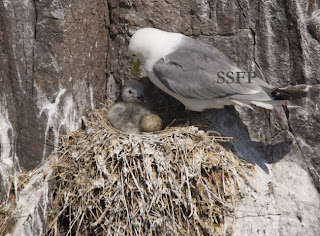 It is thought some Kittiwakes abandon the colonies in Shetland and moved south to Orkney where numbers increased in the late 1980's. Laying is often delayed to coincide with food availability  but even in good years eggs are taken by Ravens and Hoodie crows, with the young taken by Gt Skua and Gt BB Gulls, keeping numbers low. 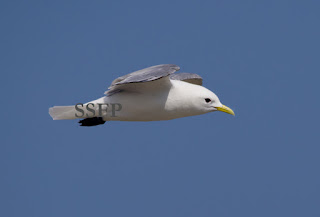 At Sumburgh a well studied area, during 2001-2003 productivity was nil, with only a slight improvement the following year.This colony has remained stable since 2005 with around 355 nests, this being mainly due to the adults being long lived. 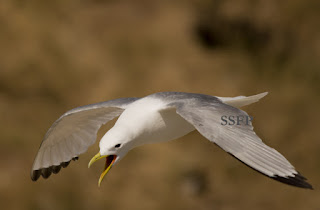 Kittiwakes have moved to another food source with the preferred food, Sandeels getting harder to come by. These are pipe-fish which seem to be more abundant. But having watched an adult bird taking around 10 mins to swallow one, you can see why so many young birds choke to death. 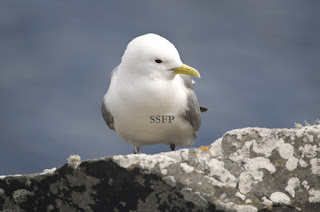 Posted by Shetland Storm Force photography at 08:21 No comments: