Just when you thought that was that for 2015, news came in the at a Mourning Dove had turned up in Lerwick. This long distant migrant from southern Canada was the first record for Shetland and the 5th for Britain. 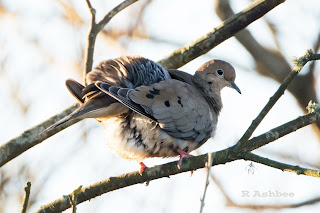 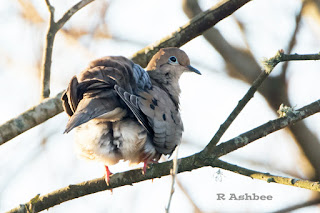 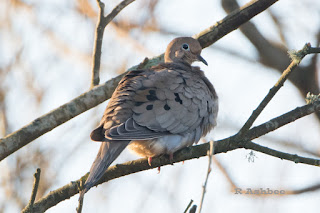 It was found on Saturday morning in a garden and lucky for us it stayed around the next day when we saw the bird in company of Collard and Rock Doves. This was a big twitch for Shetland with just seven of us looking on. The bird did little other than do a bit of preening in the hour I watched. It is also known as the Rain Dove and is one of the most abundant and widespread bird in North America. It is thought that in some years as many as 70 million birds are present. 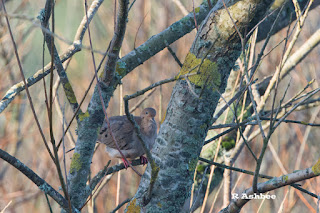 They can raise up to 6 broods in one year. 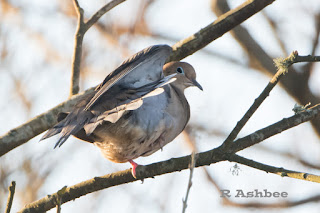 It is exceptional for birds to migrate over water, they usually fly in flocks at low altitude during the day. Not all Mourning doves migrate and some winter in Canada. 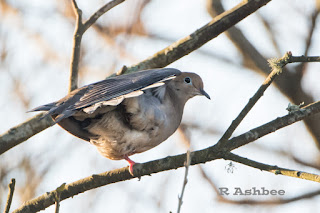 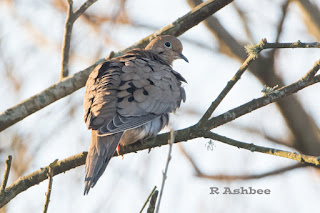 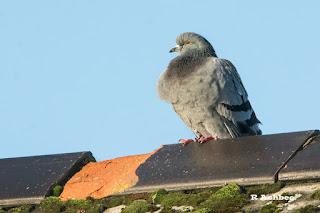 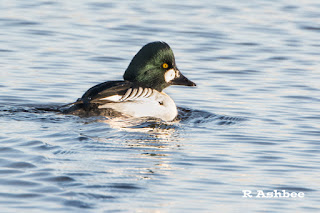 A happy new year to each and everyone of you, thanks for reading the blog, more to come next year. In the meantime take a look at my other blogs:

Posted by Shetland Storm Force photography at 14:31 No comments:

After nearly a week of gales, rain and cloud last weekend was dry, sunny with the wind picking up late Sunday. I was busy all day on Saturday but on Sunday managed to get out around Sandwick for a few hours. 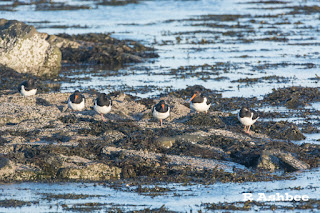 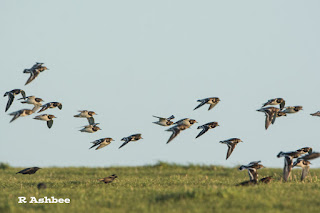 Down at Sandsayre a small party of 8 Long Tailed Duck kept flying one side to the other. Most of the rocks by this time was covered by high tide but this concentrated the waders. Numbers seemed lower than usual with Oystercatcher (8) Turnstone(14) Purple Sandpiper (4) Ringed Plover (1) stood together most sleeping. 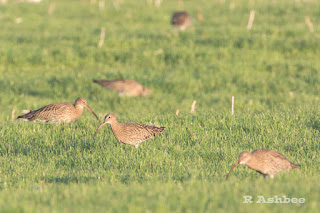 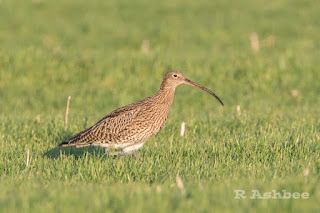 Down at the Wart, lots more waders feeding on the grassland- Curlew (177) Golden Plover (122) Turnstone (22) Lapwing (46) Redshank (4) several Hoddie Crow, Greylag (66) while a passing Merlin put everything up . Several small flocks (around 50 in each) of starling fed close together and several Blackbird and Fieldfare could be seen scattered among the sheep. 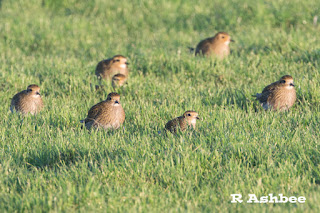 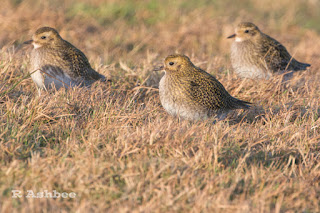 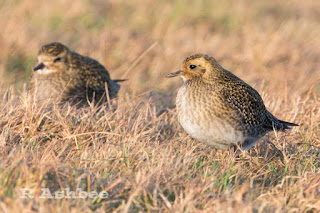 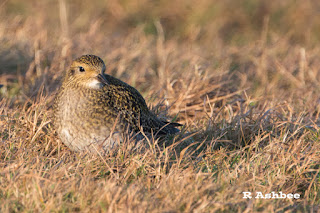 On the way back home a migrant Kestrel flew up from beside the road. 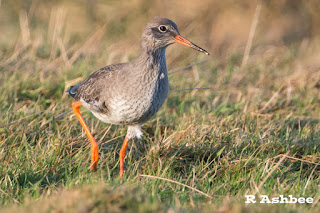 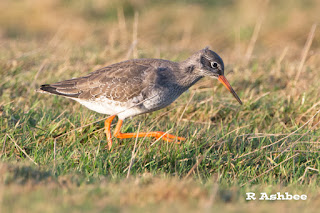 On the rarer front, the Rough Legged Buzzard has been seen occasionally around the village of Sullom. The Lesser Scaup is at Loch of Benston and the Oriental Turtle dove is still in Scalloway.

With the weather being so changeable I don't think I will for the next few days so all the best Christmas
Posted by Shetland Storm Force photography at 06:17 No comments:

When a report comes out its generally grim news for birds. In Shetland we seem to have a reasonable population of Curlew, that based on numbers seen by me and not done by surveys. But it seems overall that Curlews are one of five upland species that has been added to the Red data List. Two of the other 4 species Merlin and this year Grey Wagtail which breed in small numbers in Shetland, the other two Dotterel and Whinchat are very occasional visitors.

The total upland birds on the Red List now stands at 12 species. Out of a total of 244 breeding  species , 67 species are now at risk which is 27% of the total rather than the 21% in the last survey. Only Bittern, Dunlin and Nightjar have been given the all clear and downgraded to Amber. 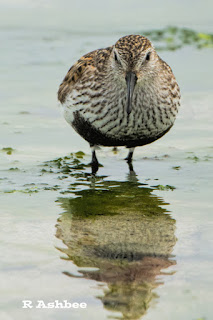 In addition three seabird species have been added to the Red list for the first time, all these breed in Shetland. The Puffin, Shag and Kittiwake may come as a surprise to some especially to those who just enjoy watching birds. Its been a well know fact that Kittiwake numbers have fallen at all sites around Shetland, many years ago the Kittiwake call was one thing that everyone who visited Sumburgh or Hermaness would have heard regularly, now its rare. 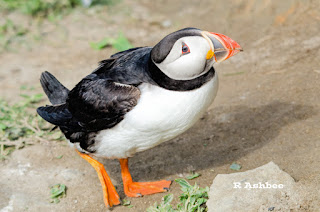 Puffins are everyone's favourite so this one may come as a shock and may gain support as it is one of Britain's most popular birds. Very few Puffins brought sand eels back to Sumburgh cliffs this year. Although the terns seem to bring back numerous eels down at Grutness a mile or so away.

Another bird I have enjoyed watching this year was Corncrake, which may have bred. This is another one declining with numbers dropping by a 1/5th with almost all areas being affected. They are normally short lived birds - 2 years, but numbers can recover quickly given the right habitat. Two birds took up territories in Shetland this year to my knowledge. On nearby Orkney 38 males called in 2014 but this dropped to 16 calling males in 2015. 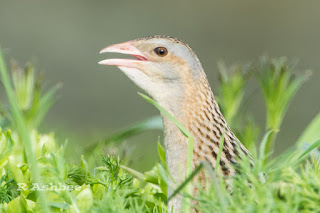 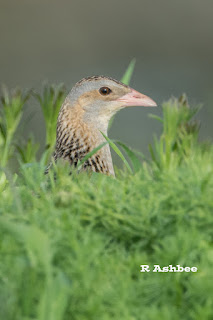 Shags can easily suffer a bad breeding season as they are early nesters and often have nests washed out by high Spring seas and wet weather, this is often the case at Sumburgh. Britain supports 45% of the world population so its important that we understand how Global warming is affecting bird populations. 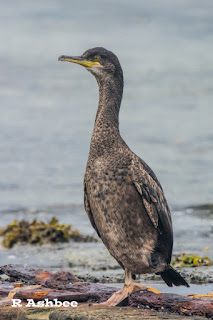 New plankton species brought into our seas due to Global warming is less suitable as food by Sand eels which are an important food source for Puffins, Guillemot, Razorbill, Kittiwake , Divers and Terns. Over 120 new species(inc lots of new insects) have been recorded in the UK since the 1990's as recorded by the RSPB, while others are now having to retreat northwards and may be lost from the UK list. 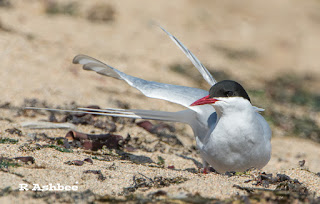 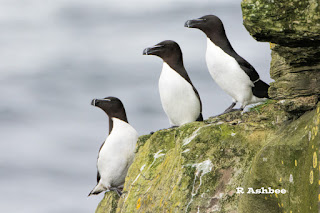 For one, less King Eiders are seen in Shetland, more summering Long tailed duck could be seen in the 1980's and 1990's, they are very rare now. BTO surveys have indicated that northerly breeders are moving 3.3km further north each year. Birds such as Barn Owl, Nuthatch are quickly spreading into Scotland, these species very rare in the 1990's

A survey conducted by the BTO has indicated that the north has had a very poor 2015 breeding season. This is down to a cool wet spring and summer which has affected long distant migrants such as Willow and Sedge Warblers, these both have problems crossing the desert on migration. 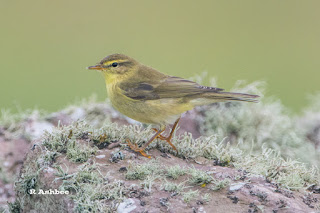 Now as I said earlier it is easy to assume that a species is doing well by occasional observation but the only accurate way is to do survey's like the RSPB and BTO. In Shetland I quickly joined two surveys, the Breeding bird and Beach survey the latter continues throughout the year and submit records every time I go out in the field. 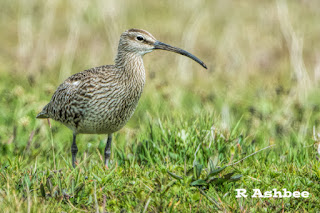 Everyone can make a contribution by submitting records its easy enough to do when out walking and never assume that someone else has sent in records. The Shetland bird club has indicated in the past that most of their records relate to migrants (mostly rare) while common species go under recorded. 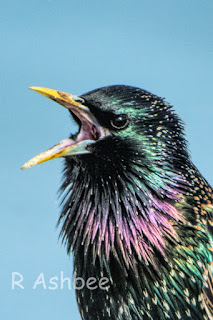 Starling an under recorded species
Posted by Shetland Storm Force photography at 08:17 No comments: