Shetland appeals to a wide variety of people, but most are interested in wildlife and the environment. Over the years we have met some of  the  most famous people of Shetland.(or so we think !!)

Many years ago David Bellamy visited Shetland and we met him at the Aith Lifeboat gala, it was at the same time that the Greenpeace vessel Rainbow Warrior was in Lerwick . David is well remembered for his enthusiastic TV programme's on his Botanical exploits, but perhaps more so when he claimed that man made Global warming doesn't exist. 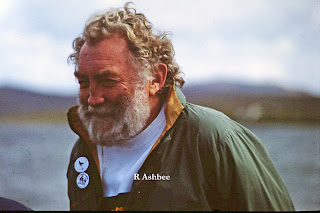 We have met Bill Oddie several time and he is very enthusiastic about Shetland. Having read all his books you can see why, he spent a lot of time on the Out Skerries, but  the first time we met him was at Geosetter. I was sat in the car with my wife Diane, when I could see this man walking towards us and I said that's 'Bill Oddie'. When he got closer we could see him clearly and he spent a good 1/2 hour talking about the birds and other wildlife in the area including a Corncrake in a near by village . I suppose that he could at least get away from people up here so some quite time. Later he was back up when the Braer sank in 1993 in force 11 gales, trying to encourage people to come to Shetland on holiday and he was down at the Sumburgh hotel a number of times when we went in for a meal. 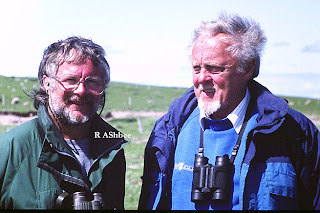 As for Bobby Tullock, he was Mr Shetland wildlife. Having been born on Yell he grew up with a great appreciation for the wildlife in his native islands. Working for the RSPB for a number of years then starting a tour company in which he introduced a large number of people to Shetland. He is also famous for discovering breeding Snowy Owls on Fetlar in 1967 and arranging their protection.

Mr Lifeboat man is generally only seen at the Lifeboat galas in Aith (West side) and Lerwick (East side), other times you may spot him in his lifeboat with other members of the team as they are very active throughout the year. Shetland could not do without them, keep up the good work !!!!!!!!!! 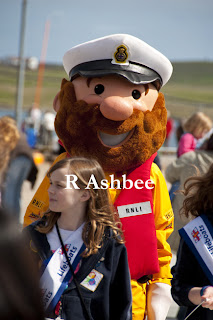 The photo below, taken many years ago in Yell may well be a Trowie. These are famous Shetland folklore small troll like fairy creatures who are very mischievous . Although generally seen at night, this one may just be coming home late from a party. 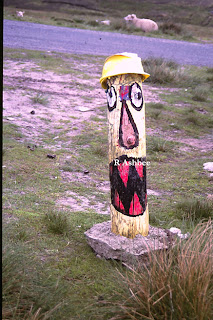 In a thousand year from now, archaeologists may well be asking whether Darth Vader (Star Wars) actually visited Shetland. This realistic carving can be seen down near Sumburgh head. 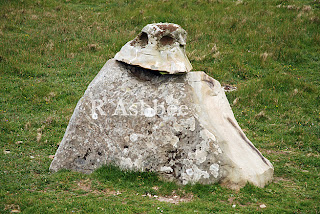 Posted by Shetland Storm Force photography at 08:53 No comments:

I have been interested in otters for a good number of years. Having read a few books on otters I decided, back in the late 1970's to take part in the first UK otter survey. I joined a group studying Welsh rivers and had signs on four of the six we surveyed. The 1977-1978 survey became the benchmark for future surveys which have been carried out every seven years .In those days otters were extremely rare and chances of seeing one was restricted to the remote islands or the west coast of Scotland. 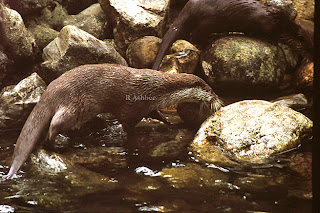 The methods employed, was to walk  a 600 m transects along a suitable river looking for Otter spraints       (droppings), especially under bridges or where rivers met. Although we did find a number of spraints on large rocks close to the river as well . In between my survey visits , four in all, I actually saw four otters while visiting the west coast of Scotland. Out of six people in our group only the leader had seen otters in the wild and although we had received training we didn't expect to see Welsh otters as they were considered to be nocturnal. 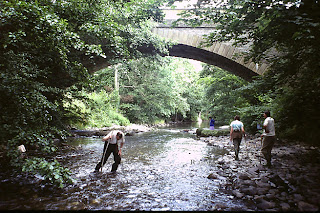 Our first encounter with otters is still very vivid,  I can clearly recall seeing an otter in broad daylight swimming along catching fish in Little Lock Broom, then coming onto land to devour a larger prey item. This sighting last over 20 minutes. Since then i have seen other otters on the West coast of Scotland and the inner Hebrides,as well as Shetland.

Books such as Tarka the otter and Hugh Miles book on Shetland otters, whetted my appetite for more, we even visited Gavin Maxwells retreat on the remote West coast of Scotland. 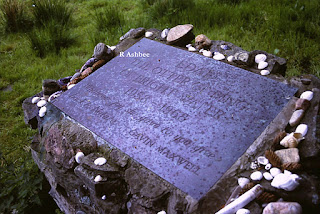 Shetland on the other hand is the best place to see otters in the whole of Europe. They estimate around 1200 animals but I am sure this is a slight under estimate as lots of young cubs are seen each year. Again the otters can be seen during day light.

We have had over 25 sightings while spending holidays in Shetland, the best was on our last visit. We had parked up in a line of cars at Toft waiting for the ferry to Yell. We were the four car in line. Having got out to scan round for seabirds, along with a couple of others we were amazed to see two otters appearing in front of the line of cars, and then proceeded to run towards us until they were six feet away then they split up and went back into the sea. I had left my camera in the car, but two other people close by were unable to react to this amazing sight and missed the opportunity as well. 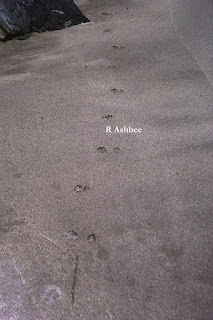 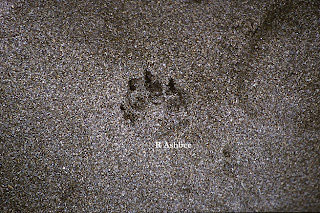 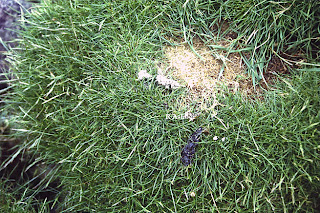 Again it just goes to show that you have to expect the unexpected !!!!. Otters have even been reported in Sheffield along the river Don, how amazing is that. I can even remember seeing an otter on the local TV which has been caught on a CCTV camera going across a car park in Leeds, this was several years ago. 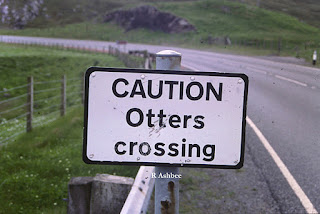 With water pollution less evident along our rivers& otter hunting banned you can now find otters in every county of England. However you cannot beat finding your own otters in Shetland, set among beautiful coastal scenery, alone, using your knowledge and expertise to see one of these fascinating animals.
Posted by Shetland Storm Force photography at 07:01 No comments: