While Blackbirds may not come top of most birders lists they are an important species in Shetland. With only around 70 regular breeding species it is one of the top five most seen birds. Very few records are submitted to the Shetland bird Club so you can make a difference by sending in your records.Recent estimate tend to be around 2000 pairs throughout Shetland and increasing. Interestingly most birds are found around human habitation, breeding around crofts, in villages and towns 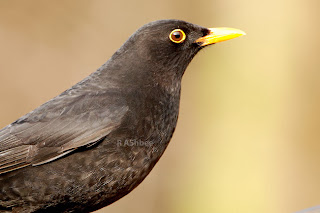 I love to hear Blackbirds in song, its a great sign of spring and birds usually start singing around early February in Shetland although  they tend to sing less that those on the British mainland. Song posts such as telegraph  poles, wires and tops of buildings are frequently used.

I have found  a few birds nesting in rabbit holes, this may be unusual but they are away from any predators such as the passing Skua. With very few bushes to nest in most are found nesting in buildings with open access  They seem fairly successful and i have seen young at many sites, even on the cliffs at Sumburgh. 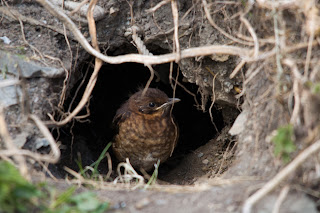 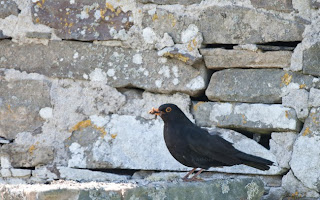 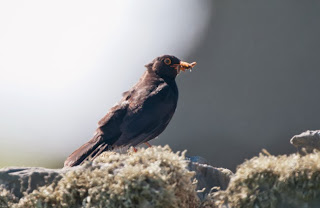 Come Autumn migrant Blackbirds arrive in force generally in October and November and fly in with other thrushes such as Redwing and Fieldfare. Sometimes hundreds of blackbirds can be seen which is always an impressive sight. Birds ringed in Shetland have been recovered from Norway, Iceland , Finland, Germany, France and even one in Spain.

Most of the food is collected on the ground although they do love a berry so those planted in gardens become very attractive when the ground is hard with frost or snow. They face competition from the more aggressive Fieldfare and even the occasion Waxwing if conditions are right. 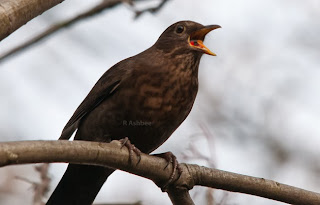 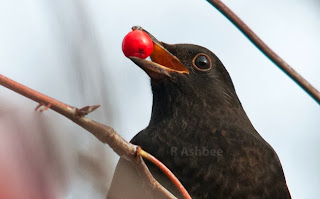 Cats seem to take there toll on numbers and with many feral cats in Shetland it may be a big problem. The traffic is not the problem as it is in Sheffield, many birds are killed as they fly low across roads, although I gather that some are now learning to fly higher to pass over such dangers 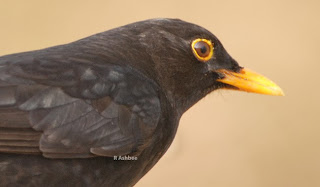