Its that time at last, after what seems to been a long winter, spring has finally arrived with migrant birds streaming back up north. Some may say its spring when they see the first Swallow or Bluebell, but for me its  the birds singing.

Some birds like the Robin have been in song since last October, and some sing for a long time, well March - November like the Chiff Chaff.  But for most its only a few months in song so they can attract a mate, which makes it difficult for anyone trying to learn bird song. Trying to remember a song from last year is difficult and trying to put the song to an actual bird species is also hard. It comes with experience and being out in the field as often as possible to make sure you absorb the songs as much as possible. 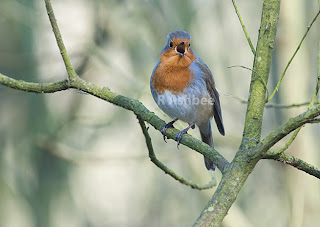 Its great to be up early to catch the dawn chorus, the sound is amazing , but within a few hours of sunrise the song diminishes.

Tomorrow I am giving a talk to the Woodhouse Wildlife Group on bird song, after many requests, not just from members of this group but others as well. It would seem that people are interested in learning a few songs, a few at a time is best. Some you can describe, like the Yellowhammer - a little bit of bread and no cheese, or the Police car call of the Great Tit and some like the Wood pigeon- well what do you say. One calls down our chimney each morning much to the annoyance of our cat.

When we were in Shetland on our last visit we found a grasshopper warbler singing down at Virkie, this bird decided to stay a long time , calling throughout. This is an easy call - a reeling sound like that of a fly fisher mans sending out his line (or reeling), the other close one to this is the Savi's Warbler but this is higher pitched. 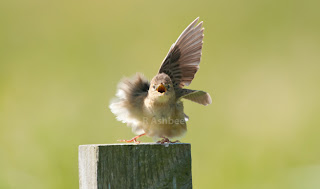 I also love the sound of Eider ducks and Puffins calling, I can listen all day. But the intention is to attract a mate, or to make a warning or perhaps a contact call if flying in a group. Like all things if you can see the bird and identify it when its singing it sticks better in the mind

Birds often use a high song post to spread their song over a wide area, or like the skylark sing from high up
as song posts are limited where they nest. Yet others like the Reed warbler singing from the depths of a reed bed or the booming of the Bittern is just as captivating. 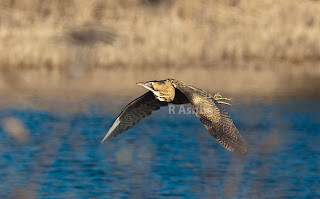 All in all Spring is a great time for birds in breeding plumage's, for song and display when they might be more evident than the rest of the year. For some like migrant birds arriving from Africa or other areas we only see them for a few months before they fly south again. 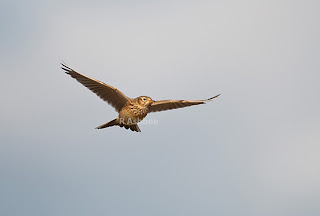 Skylark
Posted by Shetland Storm Force photography at 07:45 No comments:

Large numbers of dead Puffins have recently been washed up on beaches between Aberdeen and Northumberland. during the last weeks of March 2013. Its hard to say whether breeding numbers in Shetland will be affected in years to come. Historically all seabirds have been having a bad time for more than 20 years and this wreck will have a further effect on numbers breeding throughout the North East. Puffins are known as Tammy Norie In Shetland

Very strong , prolonged easterly gales have made it hard for birds to find food and as a result many have starved. Puffins tend to winter far out to sea, unlike Guillemots and Razorbills which tend to be further towards the coast in winter. Therefore normally any dead Puffins would not be found as they are carried away by the sea, but the strong easterly winds will have blown dead birds onto the beaches and during the first week alone over 400 dead Puffins were found, along with a number of dead Guillemots and Razorbills. 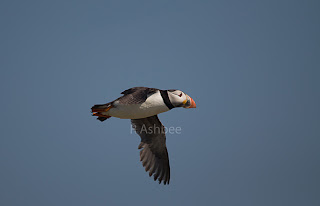 Around half the dead Puffins were adults , mainly 1-3 years old. Although this will not affect breeding numbers this year it will have a long term affect on a species that is already in decline. Puffins normally mature around 4-5 years old and start to breed when they are 6-7 years old. The other 50% were immature birds and with many young birds leaving the nest under weight due to the lack of food they would find it more of a struggle to survive even a normal winter. 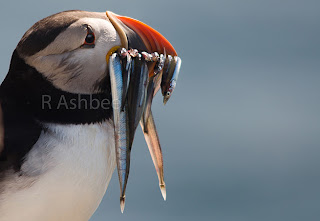 This is the largest wreck since 1947 and it has happened at an unusual time of year with many birds already back at the base of the cliffs, ready to return to the nest sites. Even in the US unprecedented numbers of Puffin deaths have been reported, with a small number of Razorbills. 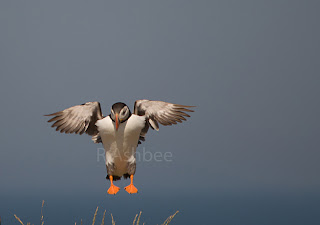 Scotland holds around 45% of the European population of seabirds, but with the lack of sand eels in recent years, predation from Skuas and other large Gulls and with other birds drowning in fishing nets, seabirds are finding it difficult to raise any young. 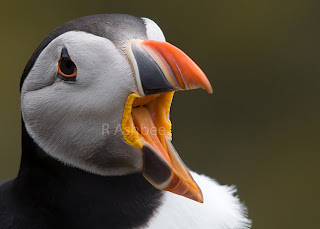 For over 33 consecutive years the Shetland bird club has run the Beached Bird Survey in which they count dead birds along beaches. In 2011 just under 1000 dead seabirds were found, 23 of these oiled birds another  problem seabirds encounter. 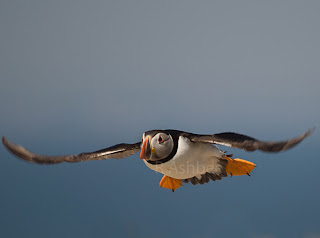 Shetland has a dedicated band of  survey workers and it will be interesting whether they record a high number of Puffin deaths this year. The excellent Shetland bird report also indicates that colour ringed Puffins sighted year to year show adult Puffin  survival rates were relatively high between 1987- 1999 but from 2000 onward have tended to be lower, which coincides with the lack of food 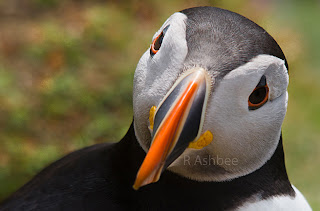 Posted by Shetland Storm Force photography at 07:44 No comments:

This is the largest seabird in the North Atlantic, with an increasing population in Shetland with colonies at Noss, Hermaness on Unst as well as on Fair Isle. Overall  the UK has around 250,000 gannets 58% of the world's population. 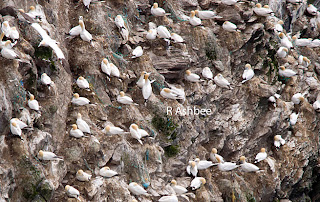 Shetland supports around 10% of the UK population. Normally birds winter of the coast of Africa returning to the cliffs around February with eggs laid in April. Breeding begins around the age of 5 or 6 years and then they stay together for years. When the arrive back on the steep cliffs pair bonding takes place and this involves shaking their heads from side to side, while sometimes leaning back , the head extended upwards and the bill  pointing downwards. 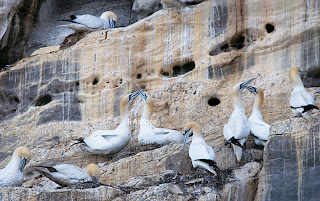 The nest is large and can be made of seaweed, feathers, vegetation and sometimes with fishing nets. Not all of this is collected outside the colony as there is continual stealing of material from nests nearby. 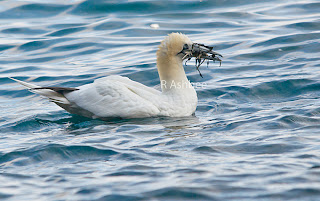 New EU polices at the beginning of March agreed to phase out the controversial practice of dumping unwanted fish back into the sea. Dr Votier of Plymouth University believes that the new ban on fish disgards is essential to cut waste and improve the fish stocks. This could have an effect on Gannets as some individuals rely heavily on fish disgards others focus more on Mackerel and Herring. Birds have been tracked travelling to South West Norway for food as well as targeting fishing vessels for disgards.Cameras have been attached to gannets revealing 42% of birds regularly targeted fishing vessels as well as searching for natural prey. While 81% of these were male Gannets but only 30% were females. 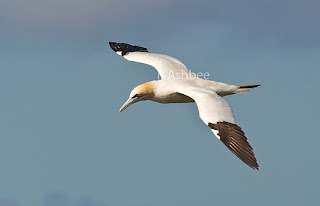 Gannets are the only consistently successful breeding seabird in the North Atlantic so it will be interesting to see how they will adapt to these new policies. Its not only Gannets that are attracted to fish disgards, a study in the late 1980's early 1990's revealed that the number of seabirds potentially supported by fish waste was around 5.9 million. That's a vast number !!! 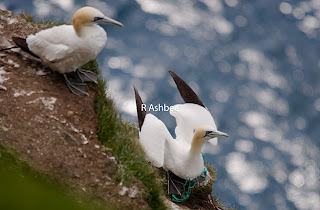 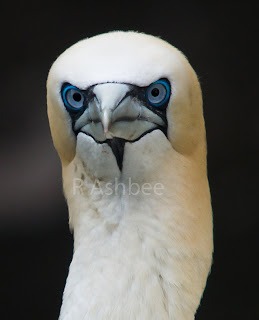 Posted by Shetland Storm Force photography at 03:29 No comments: