Well before we moved to Shetland I was involved in numerous bird surveys in Sheffield for Sorby Natural History Society, Woodhouse Wildlife Club or the BTO. These have been varied, from Breeding birds using Hedges, Farmland Bird, Waterfowl and woodland bird surveys. 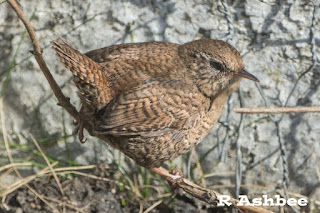 When we moved to Shetland in 2014 I immediately signed up for the Shetland Beach  survey which aims to record dead birds washed ashore throughout the year. The good news is that I have recorded very few birds, one unusual one was finding a dead Blackbird.

I have been involved with the Shetland Breeding Bird Survey for two years now. For obvious reasons I am not going to reveal exactly where my two 1km squares are but the are both very different. This survey started in 2002 with a joint  venture between the Shetland Bird Club and Shetland Biological record centre. 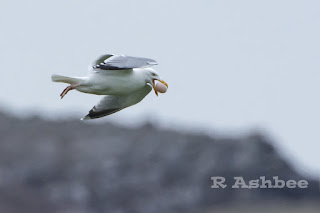 In the 2013 breeding season 60 people took part covering a total of 87 one km squares and although these squares are not randomly generated the information can be used to determine trends in breeding numbers. People tend to stay with the recording, the gaps tend to appear when people leave Shetland. The two squares  I have taken up used to be surveyed until the recorder left Shetland.

Each square is visited twice. Once between the 20 April and 10 May , and once between the 20 May and 10 June. These take place before 9 am and in good weather( sometimes a problem in Shetland). A record of wind direction, force, visibility and start and finish times for each visit. 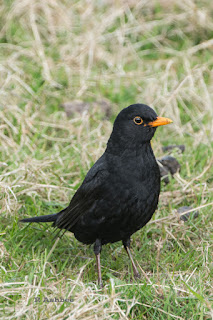 The same route is taken on each visit , birds are recorded within 100 m either side of the route and the appropriate BTO code is placed at the point on the map a bird is present. Signs of breeding and those that are not . Singing, displaying, alarming, territorial disputes, carrying food , nest material or fecal sack all indicate breeding and chicks seen with numbers. 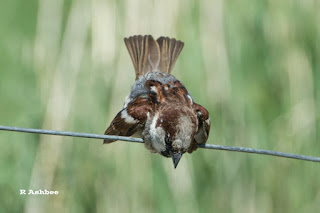 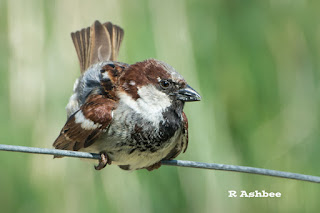 Birds such as gull, Skuas, Divers, terns and those migrants that are clearly passing through are not recorded. Rare migrants do breed in Shetland, recently Red Backed Shrike, Marsh Warbler and uncommon migrants such as Linnet, Swallow and Grey Wagtail. 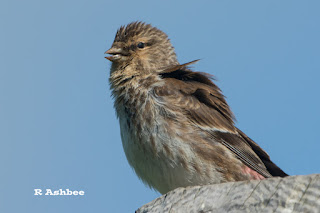 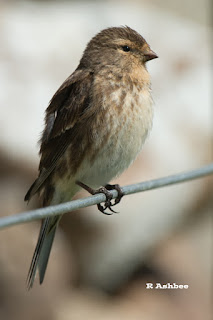 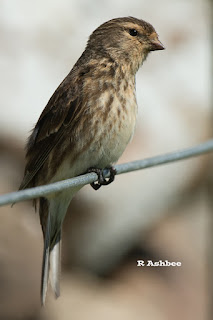 Undertaking these survey's are very rewarding, its not all about rarities, the more common birds need to be assessed . In the last Shetland Bird Report (2013) the BBS revealed alarming declines in Redshank and Lapwing both considered by some to be common waders 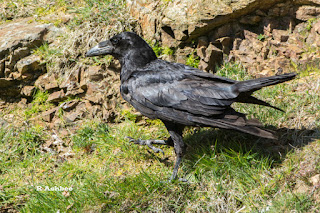 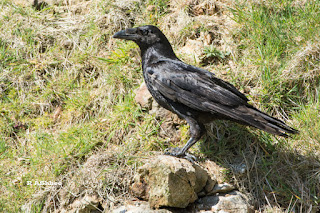 I have only two years worth of data to look at, but here are some of the results, the main details can be found in the bird report.

Of course its early days yet so nothing can be deduced from these figures. Starling and House sparrow are not included but are breeding species in each plot. 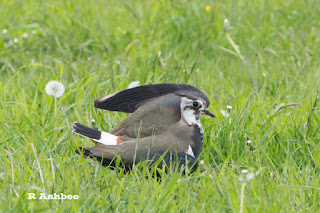 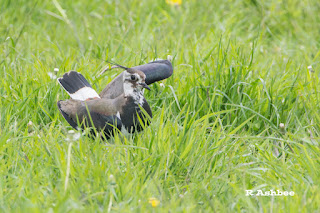 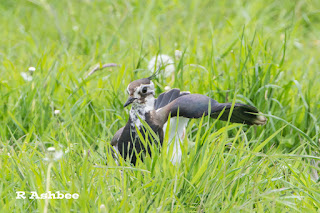 Lapwing using distraction technique to lure predator away from nest

Else where it was good to hear that young have been found in three Goshawk nests in the Derwent Valley near Sheffield, however one other nest failed due to persecution- a regular feature in the area. In Somerset , five Great White Egrets have been successful and there is hope that both Little Bittern and Night Heron may also have bred.
Posted by Shetland Storm Force photography at 10:21 No comments:

Recently the winds have been blowing from the north so not much chance for seeing migrants. The other day the first stop Grutness where Red Throated Diver (6) was a good number in the bay for this time of year. A flock of 30+ Common gull and 12 Razorbill made up the supporting cast. 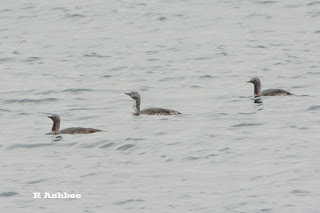 On the pool a couple of Dunlin and several Arctic terns, some carrying fish to pass onto their mate. I didn't see any with sand eels just small fish which is not a good sign. A couple of Bonnix passed over mobbed by several gulls. 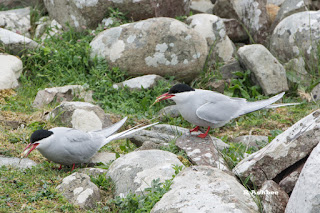 The garden was quiet with only a Willow warbler and a singing Chiffchaff. A flock of noisy Twite passed overhead as I walked onto the beach.. Two Swallow flew low over the beach collecting insects and  a flock of 18 summer plumage Sanderling scurried up and down the beach avoiding the incoming tide.

Approaching Sumburgh Gardens it didn't sound good as the gardeners began clearing the weeds and cutting the grass making the area less attractive to migrants. 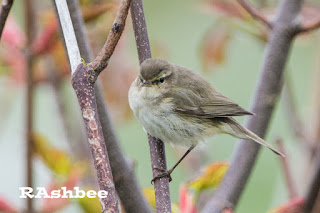 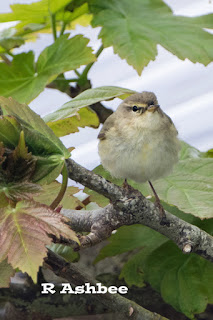 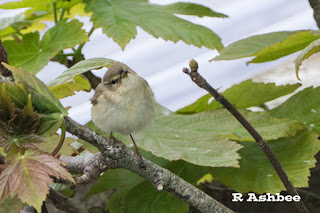 Spiggie held Gt Skua (138) bathing , Whooper Swan (pair +6 young which is great to see as there is only around 15 pairs breeding in the whole of the UK. They did breed here last year. Tufted (34), Teal(6) Shelduck (2) Mallard (16) Red Throated Diver(4) and a number of gulls made up the rest. 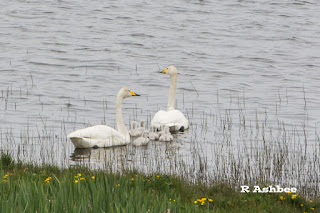 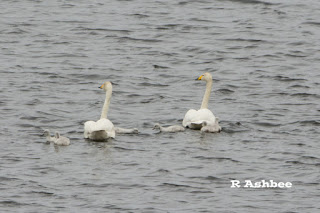 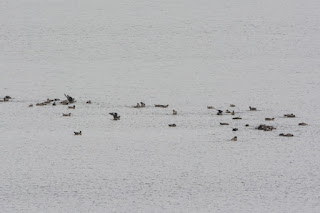 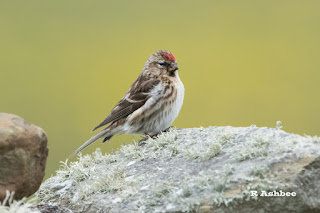 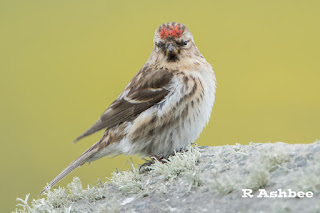 On the way up to Sumburgh Farm I met a birder just back from Fair Isle that morning and on the way back he had incredible views of the Black Browed Albatross that turned up for around 5 hours. This must be the bird that has recently been seen in Germany as `Albert Ross' - the one seen at Hermaness for many years 1970- 1995 must be at least 50 years old. ( we manage to see it among Gannets in 1993) 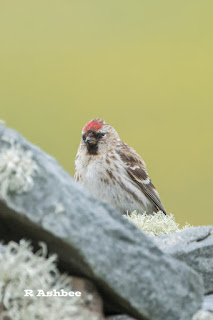 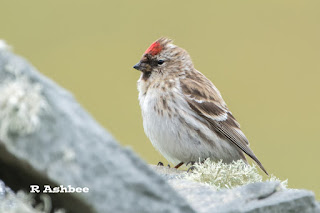 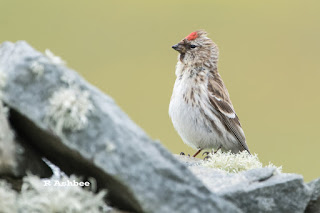 Later on Sunday evening, news came in that an Eastern Olivaceous Warbler had been found in a garden at Scatness, just my luck as I had no chance to get down to see it. 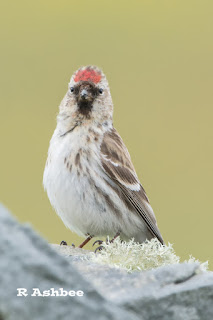 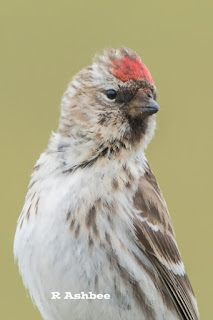 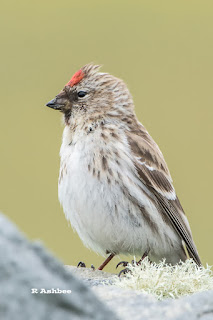 Sorry for the late post but no internet for a week
Posted by Shetland Storm Force photography at 12:43 No comments: