I like winter birding as it bring many more birds into the area. Just recently Goosanders have been seen at.Strand Loch, these are very attractive birds. The males tend to have a pink flush on their breast, while the red headed females are just as smart. 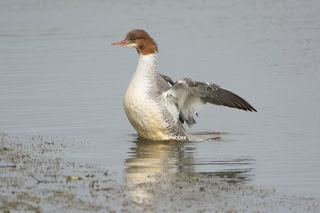 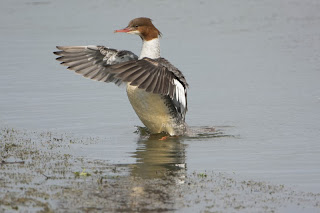 These are winter visitors to Shetland, mostly December - early spring and normally only in small numbers. Elsewhere they are a bird which is increasing in the rest of the UK, much to the annoyance of the local fishermen who see them as a threat. 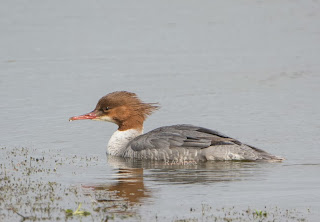 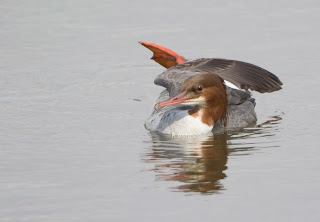 The most I have seen in one spot was back in 1999 when i was involved in a wildfowl survey in Sheffield. I watched a local pond, not very big but during that winter an increasing number of Goosander found the fish too hard to resist. Initially only 20 birds were present but numbers built up during the week ending up at 137 birds. These were catching very large fish and with numbers so high the fish stock didn't last and they moved away with non present on the eighth day. In the Peak district they have started to breed on a few rivers but numbers will always depend on game keepers and persecution.

The Red Breasted Merganser is a locally scarce breeding bird found both on the sea and on lochs but in small numbers normally.Numbers may be swelled by young birds but normally a few pairs are normally found together although these are often secretive. 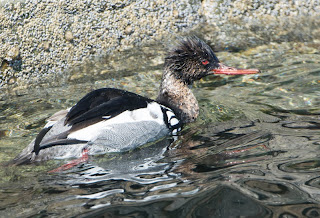 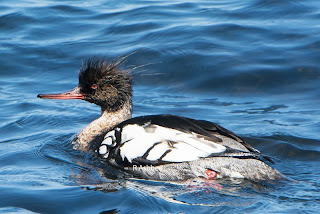 Its not uncommon to find birds present in Lerwick, especially on the south side where i have found birds close into the coast. The largest numbers occur in winter with over 150 birds near Whiteness in December 2012 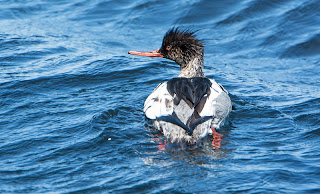 Both birds are diving ducks, taking fish, even large ones. The other saw bill is another winter visitor this time from Scandinavia - the Smew. The male is extremely smart inits black and white plumage, this is a smaller bird than the other two. At certain locations the gather in small groups, the highest number has been 7 birds at Tophill Low a few years ago but around Sheffield we only get the occasional bird. Anglers and Pugney Country parks in Wakefield are often reliable sites. Most of the Smew turning up in Shetland are females or Redheads , but in December  2012 a male turned up at the Loch of Clickhimin whee it stayed several days


Posted by Shetland Storm Force photography at 05:54 No comments: