When you watch a regular patch you always come across a surprise or two. Whether its an increase or decrease in some bird species or locating a new species for the area, it can be very rewarding. Imagine then , Bobby Tullock discovering a new breeding bird not just for Shetland but for the UK and having to keep quite while finishing off a bird watching tour. 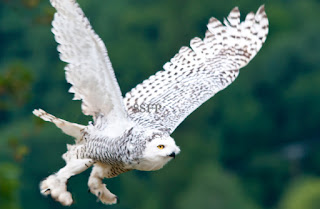 Snowy Owls are not little brown jobs, the are big and conspicuous. But its surprising how well thy blend into the Fetlar landscape. During the 1960's a small number of Snowy owls became resident in Shetland, and in 1966 there were two males and a female resident on Fetlar. Then Bobby Tullock discovered a nest with eggs in June 1967 and the rest is history. Over the next nine years 56 eggs were laid and 23 young fledged, mainly by one pair although two nest were found 1973-1975. 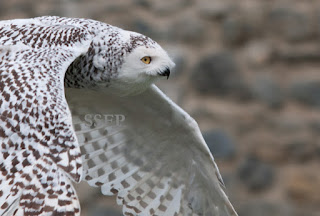 On our first visit to Shetland in 1987 we visited Fetlar and found one female behind the school. It few a short distance before settling down for the 1/2 hour we watched it . It was well camouflaged against the hill side. This was one of two females left from the young hatched up to 1975. We then fell lucky as we saw another bird on Unst two years later. Apparently the birds had moved away from Fetlar when the rabbit population fell. Recent sightings are scarce.
Posted by Shetland Storm Force photography at 07:10 No comments: