While everyone is out chasing rare birds, just give a thought to the more common birds such as the House Sparrow. Back in the 1980's I have a very interesting chat with a person who just chased rare birds, he had no time for the common ones, he had seen one so why look again !

Common birds are really the bread and butter of birding, yes Shetland turns up many rare birds and they are worth going to see, a vast amount of information is collected on these. Just stop a minute and check out the recent Shetland Bird reports and you will see the words, ` very little data received' or there may be a few comments, but people don't see the need to record information on this or other common birds.

Go on to say 2050, house sparrows are in decline in most places, they have become the rare bird !!!
Take London where sparrows have declined by around 68% in the last 17 years. No clear cut information is available but several theories have been put forward such as:
A chemical additive in `environmentally friendly fuel' , cats, magpies and Sparrowhawks

Nationally the BTO has studied the problems , a 71 % overall decline since 1971. Farmland sparrow are fairly well understood, but urban one not so much
Again they give five main reasons 1. Loss of favorable food 2. increased predation 3. loss of nest sites 4. Increased pollution and 5.increased levels of disease. 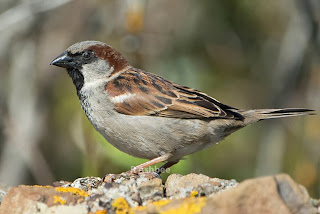 In Shetland the population seems OK, and it is always a joy to hear the short chirping call, or the males aggressive trilling. Without proper research  while numbers may look alright, how do we really know. We need to provide alot more information to the Shetland Bird Club , or see the work of a group in Skeld, Shetland by visiting http://shetlandsparrows.blogspot.co.uk/. 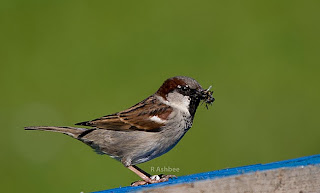 They are catching and ringing sparrows to check distribution and numbers in the area. Keep up the good work. Why not start by recording how many sparrows come into your garden during the week, its a great way to make a contribution without much effort and everyone can do it. 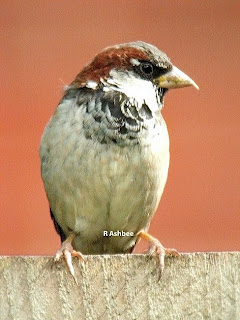 Any counts are important , while walking along the shore line at Virkie I recorded a maximum of 214 House sparrows over five walks. Back home in Sheffield, we had no house sparrows in our first garden for 6 years before moving to another house in the south side of Sheffield. Because we are the only house to have a bush this is used for nesting and sheltering, without this we wouldn't have any !!, so even a small area can make a difference. 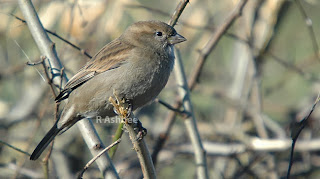 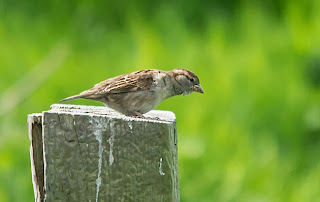 Its near relative the Tree Sparrow is a rare breeder and is usually best seen either late April or May in very small numbers . In recent years autumn passage is light with only the odd bird present September - November 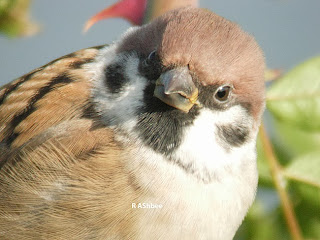 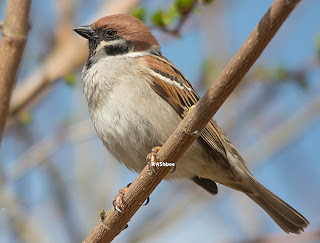