With out a doubt the number 1 bird song has to be the Nightingale. This bird when seen may not look spectacular but as soon as it starts to sing you have to take notice. 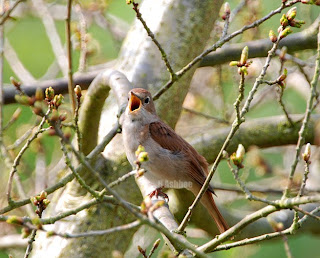 Nightingales are very rare visitors to Shetland with only 7 spring records, the last one on mainland Shetland during this season appeared at Ireland, Bigton on the 25 April 2010 , with the majority of the 87 records from autumn birds. The birds seen in Shetland are from the southern Europe population

It is a little larger than a Robin, brownish with a Rufus tail, and buff white below 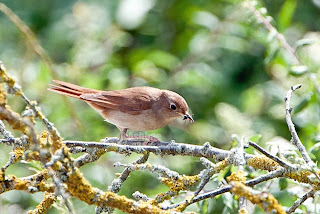 Near to Sheffield they used to be found in Clumber Park, but have long since gone so its over to Whisby Park in Lincolnshire where about 12 pairs breed. Else where we have come across singing birds down at Rutland water, again none this year, in Norfolk and especially in Suffolk with Minsmere a good place.The RSPB indicates that around 6,700 male, although, the BTO estimates 7,500 males, can be found in England, especially in Essex, Kent and Sussex. The BTO estimate that between 3.2 - 7 Million birds are present in Europe 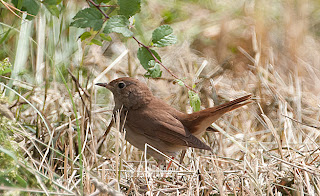 Once you nip over to France, you can tell the difference, with birds even around the Calais area. The most abundant areas we have found , area down in the Camargue and over at Waghausel in Germany where they are abundant. Birds sing both day and night, although only unpaired males sing at night and I can listen to them all day. They generally can be found in song from April to early June. Its not often you see them as they tend to sing from deep inside bushes, but they have to come out to feed so its worth spending some time in the area to see them. 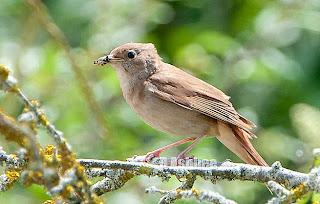 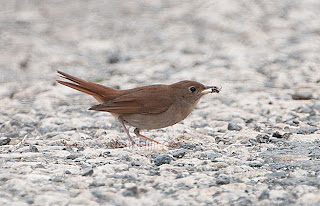