Shetland is a great place to watch Puffins, especially down at Sumburgh head in the south mainland. The RSPB installed a Puffin cam a couple of years ago in one of the burrows, check out http://www.shetland.org/puffincam/ for live views.

This is one from last year 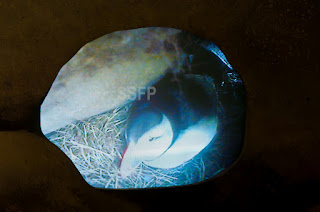 This year an egg was laid a few days ago.

Last year when we visited Shetland we made a number of visits to Sumburgh to look at the Puffins and live pictures of a Puffin on an egg. The egg was due to hatch on the last Thursday of our holiday so we made our way down. Unfortunately the egg had hatched but the young had been predated, possibly by a stoat which had been seen around the lighthouse a few days before. 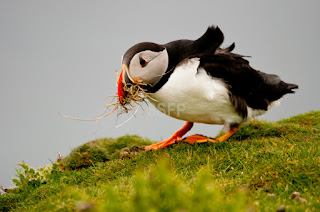 Hopefully things will go well, providing the adults can find the food to feed the young !!!

It's always interesting to listen to people when they are watching Puffins, last year some Americans made a whistle stop tour of Sumburgh with some saying how cute the penguins were and others making comments about the young puffins, which due to their size they had miss identified the adults.

I have always thought to get people interested in birds it's great to take them to a seabird colony where the sound, smell and sight will convince them to take up watching birds 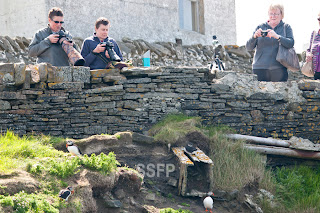